The below article was first published in the January 2021 issue of Resource Recycling magazine, the leading national magazine focused on residential recycling, and is available in the online flip edition format.

Over 100 communities in the Northeast U.S. work together to move recovered glass to two downstream outlets. They also found a unique way to communicate the process to the public.

At a time when depressed recycling markets and negative news stories about recycling have residents across the country wondering what actually happens to their recyclables, the industry could use a case study that highlights recycling sustainability.

One such example can be found in efforts around glass recovery in the Northeast U.S., where the recycling nonprofit group Northeast Resource Recovery Association (NRRA) has worked with over 100 member communities to reliably move material to fiberglass insulation and glass aggregate end users. In addition, the systems in place are being detailed through digital storytelling, helping residents, government officials and others better understand what happens to the glass material they recycle.

NRRA was founded in New Hampshire in 1981 to provide up-to-date information as well as technical and marketing assistance in the general areas of waste reduction and recycling. Today, NRRA is one of only a handful of nonprofit organizations in the country that operates a cooperative marketing model for recyclables. This means that NRRA connects its member municipalities with companies that acquire material from municipal recycling programs. In addition to cooperative marketing, NRRA provides educational opportunities and technical assistance to 400 municipal, individual and business members throughout New England.

Of late, the cooperative arrangement has been particularly helpful when it comes to glass.

Ideally, glass from municipalities would be recycled into new glass bottles and jars. However, this option has become limited in the Northeast.

Up until a few years ago, many New England municipalities sent their glass to Strategic Materials’ beneficiation facility in Massachusetts, which removed contaminants from the glass and, in turn, supplied glass cullet to the Ardagh Group’s bottle factory in Milford, Mass. When operating, the Ardagh Group facility was likely the largest glass cullet user in the country. However, the facility closed abruptly in early 2018, in part due to a decline in demand from the mass beer market.

The closure left many municipalities scrambling to find alternative markets for their glass. The Northeast has the highest tipping fees in the country for municipal solid waste, averaging around $85 per ton, in part because of space limitations for new or expanded landfills. Since glass is heavy, it is expensive to transport, whether for recycling or for disposal (where permitted).

CONNECTING TO FIBERGLASS AND AGGREGATE MARKETS

In response to the closure of the Ardagh Group facility, NRRA worked to develop a new outlet for recycled glass for its member communities.

NRRA was introduced to 2M Ressources (2MR), a Canadian glass processing company located south of Montreal (the connection came via New Hampshire the Beautiful, a nonprofit group supported by food and beverage companies). In August 2018, NRRA signed an agreement to supply 2MR with glass containers.

Over 40 participating NRRA member communities collect and store glass bottles and jars at their own transfer stations. While most participating communities fully source-separate their recyclables and therefore already have a separate supply of glass, some municipalities with single- or dual-stream recycling participate by having their residents separately sort glass. The glass supplied to 2MR must meet the cleanest specifications and avoid all contamination, such as ceramics and Pyrex items.

NRRA member communities deliver their glass to one of three consolidation sites: two in New Hampshire and one in Vermont. From those sites, the glass is hauled to 2MR, which crushes, cleans and sorts the glass by color, then sends the resulting product to companies in the United States to be made into fiberglass insulation.

2MR has the capacity to process even more source-separated glass, but some communities find it difficult to meet the high standards of delivering glass bottles and jars without any contaminants. This is where NRRA’s second glass program comes into play: processed glass aggregate (PGA).

In response to challenges with recycling glass, NRRA first developed a PGA program for its municipal members over 30 years ago. Glass bottles and jars – and, in some states, additional glass-like material – are crushed into PGA and then used in local infrastructure projects. NRRA initially worked with several pioneering municipalities in New Hampshire that embraced using this new material.

In 1993, the U.S. Army Corps of Engineers Cold Regions Research and Engineering Laboratory studied PGA for use in roadways and similar applications. The resulting report found that PGA has negligible-to-low frost susceptibility and therefore may perform better than gravel with respect to frost heaves, which are created when moisture in the soil under pavement accumulates in a particular area and freezes. This makes PGA particularly valuable for use in colder regions, such as northern New England.

NRRA worked with the New Hampshire Department of Environmental Services (NHDES) to establish specifications for PGA to govern its use in municipal and private applications. In 1999, NHDES deemed PGA a Certified Waste Derived Product, which meant PGA was not regulated as solid waste.

Other New England states also developed PGA specifications around that time, including Connecticut, Massachusetts and Vermont. In addition, the American Association of State Highway and Transportation Officials (AASHTO) developed specifications for PGA.

PGA specifications cover acceptable materials to include, the size to which material must be crushed, and the approved uses for the resulting aggregate. However, a major challenge is the fact that these specifications vary by state. They even vary by state agency within each state. Environmental protection departments, for instance, govern PGA use for municipal and private use, but their specifications often differ from what is required by state transportation agencies, which administer use of PGA in state projects.

In order to provide some clarity regarding the differing PGA specifications, NRRA compiled a detailed chart summarizing the specifications and approved uses of PGA for each relevant New England state. NRRA also collected specific examples of PGA use throughout the Northeast and published the results in a report. The chart and survey report are available at nrrarecycles.org/glass-recycling.

Today, over 60 NRRA member communities collect and store glass bottles and jars at their transfer stations as part of NRRA’s PGA program. Similar to the fiberglass program, the majority of these communities already fully source-separate their recyclables, and some of the municipalities with single- or dual-stream recycling have their residents separately sort glass.

Municipalities transport the glass to one of NRRA’s four PGA consolidation host sites: three in New Hampshire and one in Massachusetts.

Once the consolidation site has roughly 1,000 tons of glass accumulated, NRRA’s vendor brings in a retrofitted mobile rock crusher to turn the glass into a usable aggregate. Following the crush of material, NRRA host sites own the material and can use it, sell it, or give it back to the contributing NRRA members.

Under NHDES specifications, municipalities can include any glass beverage or food container, plus some glass-like materials, including ceramics and porcelain. The resulting PGA must be crushed to 1 inch or less in size. Approved uses for the PGA include leveraging it as a subbase material for roads, bedding material for pipes, and fill around retaining walls and foundations.

Under MassDEP specifications, PGA can include glass bottles and jars only. The PGA in Massachusetts must be crushed to three-eighths of an inch or less in size. Approved uses for the PGA include subgrade construction applications, subsoil drainage systems, substitute for conventional aggregate in asphalt or concrete, and daily cover.

Communities delivering glass to NRRA’s consolidation sites in New Hampshire and Vermont pay the same $40 per ton fee, regardless of whether they are participating in the fiberglass or PGA program. The main expense for the fiberglass program is transportation to 2MR’s facility in Canada. The main expense for the PGA program is the cost to crush the glass. Host sites are given an incentive for serving as a consolidation site, receiving a lower price than contributing members for all tons of glass the host site contributes.

When communities may be paying $85 per ton to dispose of their waste, or over $100 per ton for single- or dual-stream recycling (in current markets), separating glass and recycling it through one of NRRA’s programs can result in considerable cost savings. For example, the community of Strafford, Vt. was paying $121 per ton for its dual-stream recycling. By paying only $40 per ton to bring separated glass to one of NRRA’s New Hampshire consolidation sites, the community achieved considerable cost savings.

Some single- and dual-stream communities also receive a financial incentive from their materials recovery facility for removing glass. In addition, communities using PGA save money by not having to buy the equivalent amount of gravel or sand for local infrastructure projects.

Earlier this year, NRRA embarked on an effort to better communicate its glass recycling efforts to various stakeholders as well as the general public. The goal of the campaign was to provide transparency regarding uses for residential glass, to recognize and thank participating municipal solid waste operators and their communities, and to find a more engaging form of outreach to reach new audiences.

NRRA decided to use a platform called ArcGIS StoryMaps, which can be used to create immersive stories that combine text, interactive maps and other multimedia content.

NRRA worked with Antioch University’s Antioch Spatial Analysis Lab to develop an ArcGIS StoryMap about NRRA’s glass programs. Simultaneously, NRRA worked with Ames Hill Productions to create a video about NRRA’s PGA program to embed in the StoryMap. This work was supported by a grant from the Rural Utility Service, part of the U.S. Department of Agriculture.

The resulting StoryMap, viewable at nrrarecycles.org/glass-recycling-story-map, provides residents with a detailed look at how their glass bottles and jars are being recycled. It also explains the way the recycling process saves both natural and financial resources for local communities. The project includes photos, videos and interactive maps that show the 100-plus participating communities that are recycling glass for more than 500,000 residents. The StoryMap also displays the locations of the seven consolidation sites where glass is delivered and explains how the programs operate.

Users can explore the interactive maps to see which municipalities participate and where the nearest glass recycling site is to their community. In addition, a video shows how glass is crushed into PGA and provides examples of how the product can be used locally by municipal public works departments and contractors.

INSPIRATION FOR THE INDUSTRY

In the first months of the StoryMap campaign, the response from NRRA members, the public, and media outlets has been very positive, and NRRA expects to use the strategy again in the future to showcase other successful recycling efforts in New England.

For recycling leaders in all regions, the lessons from the Northeast glass experience are clear. By connecting with potential end markets and pooling material generated across many communities, recycling can remain resilient, even when key buyers exit the system. Furthermore, with some fresh thinking and interactive tools, industry officials can effectively communicate the benefits of recycling, even at extremely challenging junctures.

Reagan Bissonnette is the executive director of the Northeast Resource Recovery Association (NRRA), a nonprofit entity that partners with municipalities to make recycling strong through economic and environmentally sound solutions. Bissonnette can be contacted at rbissonnette@nrrarecycles.org. 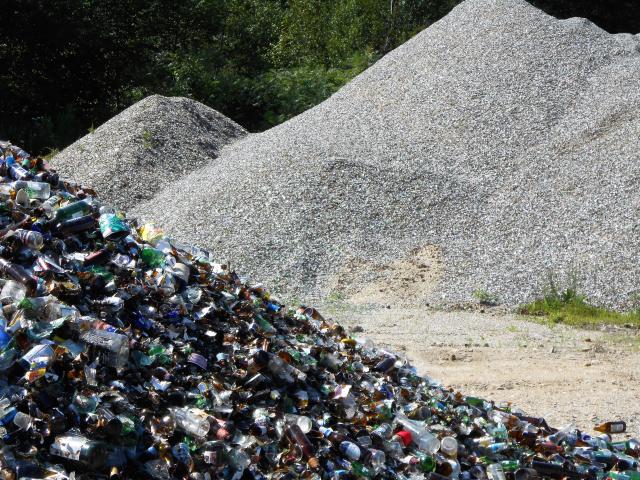