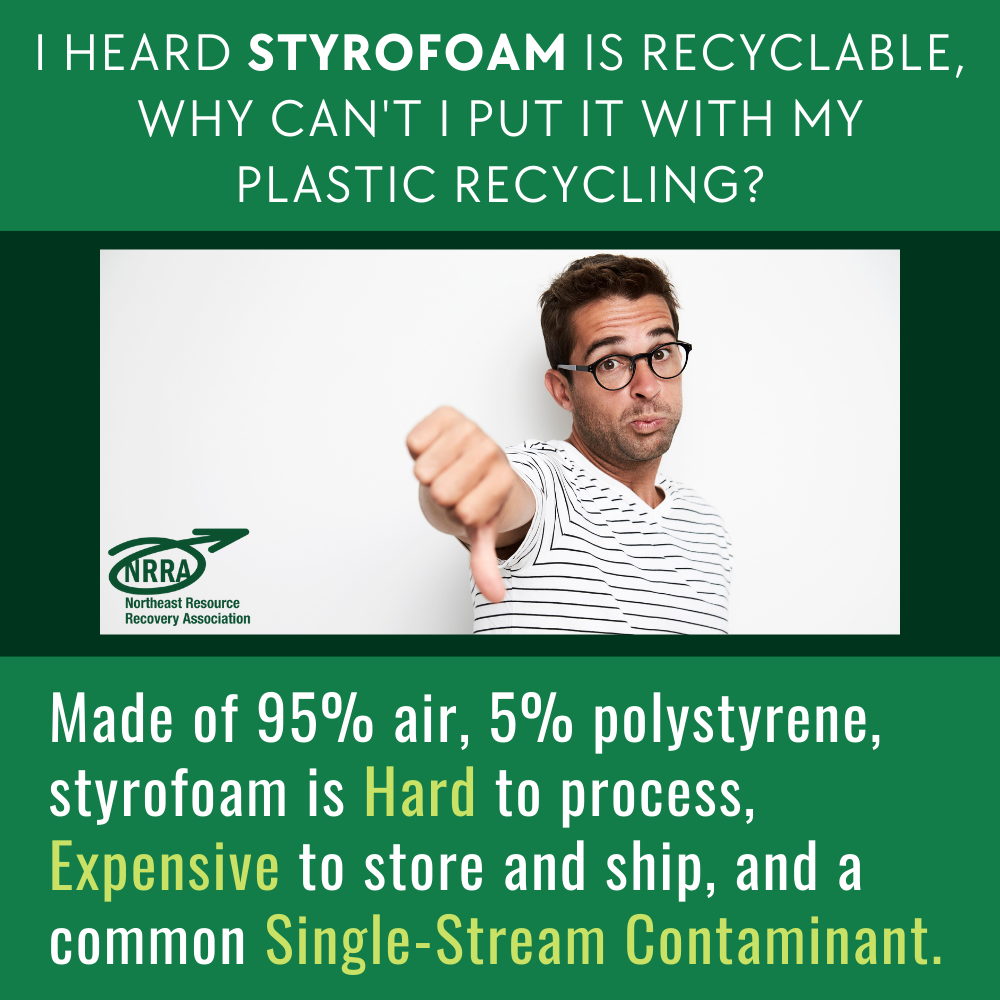 BREAKING DOWN STYROFOAM, RECYCLING, AND TRASH, OH MY!

Styrofoam is a great example of something that *technically* is recyclable, but rarely ever is. Why? Let's get into it!

First, styrofoam is made up of 5% polystyrene and 95% air, which means that it isn't compactable. The only way to break down styrofoam is to densify the plastic by removing the air through heat and pressure combined. This process requires specialized machinery, and to be profitable, requires a HUGE economy of scale that is not often found in rural areas, even when working together.

This leads us to our second point - it is expensive to store and ship. All that air means that styrofoam pieces tend to take up a lot of space, meaning it needs a larger area to store that could otherwise be used, while also remaining relatively light in comparison to other recyclable goods. Because it isn't compactable, styrofoam is notoriously difficult to bale and often needs a specialty baler just to handle it.

Finally, because many believe that styrofoam is recyclable, they toss it into their single stream - or curbside - recycling with the rest of their plastics. BIG YIKES! Not only will the styrofoam NOT be recycled, but it can contaminate other good recyclable material, meaning it all ends up in the trash.

SO WHAT CAN YOU DO?

1. REFUSE - as much as you can, avoid purchasing items that include styrofoam packaging. This includes styrofoam cups or plates.

2. REUSE - if you do end up with, for instance, styrofoam packing peanuts, save them and use them for future packing!

3. RECYCLE - if you are lucky enough to have advertised styrofoam recycling near you, take advantage! For example, Gilford Department of Public Works just received a grant to purchase a foam densifier so that they can process styrofoam from their own - and surrounding - communities!

4. TOSS IT - if you can't do points 1, 2, or 3, then don't wishcycle that styrofoam by putting it in your recycling where it can contaminate the whole load, just toss it in the trash.

This material is based upon work supported under a grant by the Rural Utilities Service, United States Department of Agriculture. Any opinions, findings, and conclusions or recommendations expressed in this material are solely the responsibility of the authors and do not necessarily represent the official views of the Rural Utilities Service. Rural Community Assistance Partnership, Inc., is an equal opportunity provider and employer.