NRRA Thanks Dennis Patnoe & Paul Tomasi for Board Service 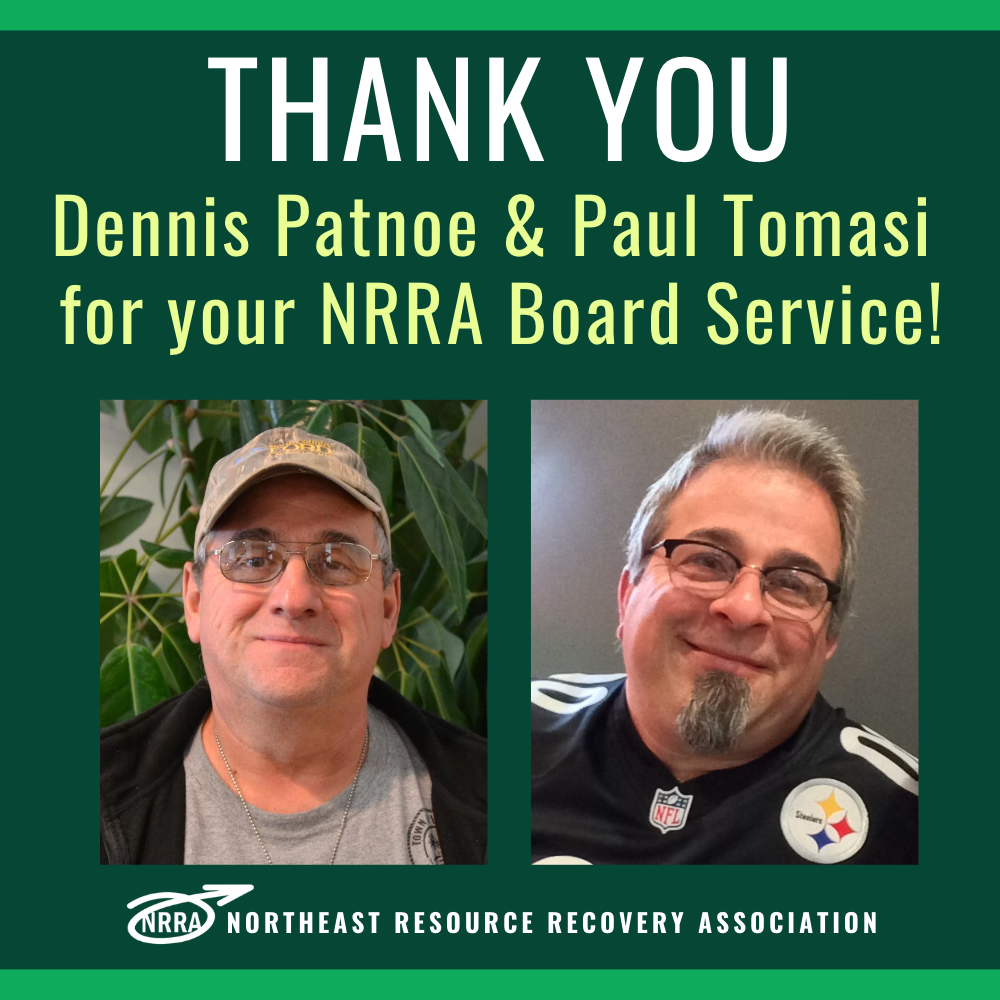 The NRRA Board of Trustees and staff would like to recognize and thank Dennis Patnoe and Paul Tomasi for their service to the Board. Dennis and Paul recently retired after completing their final terms on the Board.

Dennis Patnoe served on the Board of Trustees for 20 years, though Dennis credits his initial involvement with NRRA to a former Littleton operator who asked him along to a MOM meeting because he wanted Dennis to drive! Since that fateful first meeting, Dennis has been a steady presence on the NRRA Board and a strong supporter of Pay As You Throw programs, after helping to shepard his hometown of Lancaster, NH through to a unanimous vote to adopt their own PAYT program in 1999. He retired in December 2020 after being the Lancaster Transfer Station Supervisor for more than 15 years. In recognition of his service to NRRA, Dennis was previously awarded NRRA's highest honor, the Sami Izzo Lifetime Achievement Recycler of the Year award.

“For twenty years, Dennis has helped shape the direction of NRRA as a board member. I appreciate his practical advice and knowledge of the unique needs of North Country communities, and I’m glad he will remain involved with NRRA even as he steps down from the board.”

Paul Tomasi has volunteered his time and expertise to the Board of Trustees for eight years, most recently as the Board Vice President. He has served as the Executive Director of the Northeast Kingdom Waste Management District since 1999. Paul is currently the Vice President of the Vermont Solid Waste District Manager’s Association. Prior to that, he spent four years as the Supervisor for Solid Waste for the United States Antarctic Program. He has also worked as an Environmental Consultant in Massachusetts and Rhode Island.

“As the Executive Director of the Northeast Kingdom Waste Management District in Vermont, Paul understands the value of small, rural communities partnering together to recycle and reduce waste. I’m grateful for the perspective Paul brought to NRRA’s board from his work with communities in Vermont.”

While the Board of Trustees and staff will miss having Dennis and Paul's unique perspectives on the Board, we thank them both for their dedication to the mission and work of NRRA.